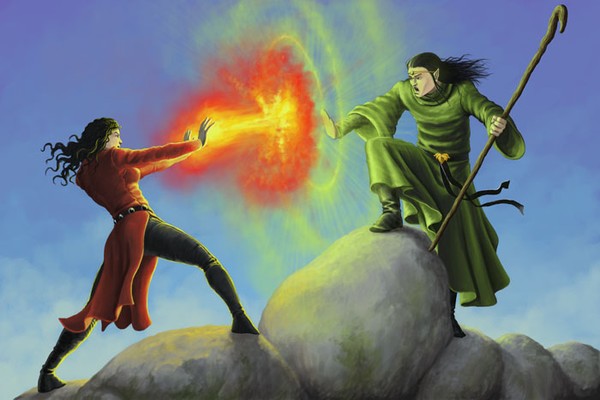 Venturing down the long, winding stone staircase, the party squeezed through a narrow passage to find themselves on the edge of a chasm. As they crossed the stone bridge, they were attacked by 5 gargoyles. After smashing the gargoyles to bits, they strode through the entrance chamber to this portion of the ancient dwarven temple, and immediately came under fire from both sides as their foe launched volley after volley of crossbow bolts from the murder holes to the east and west.

Led by a burrowshark mounted on a bulette, a small band of hobgoblins threatened from the south, a team of 5 duergar were shooting from the east and a stonemelder and her guards were shooting spells and bolts from the west.

The hobgoblins were dispatched in short order by Aria’s flaming sphere. The bulette leaped into action, squishing poor Taban under its massive bulk. A fireball to the east from Ganus took care of the duergar. Yarsha, the stonemelder to the west, cast erupting earth and caused quite a bit of damage to the party and the ground. Spells were flying everywhere as Ganus, Aria, Noctavia and Yarsha pulled out the heavy hitters. Friends dropped, foes were vanquished and eventually, the party emerged victorious. Battered, bleeding and exhausted, but victorious.

Ganus pitched a magical tent for the party to rest in. Eight hours later, refreshed and restocked, Noctavia led the charge as she opened up a hole in the west wall, completely catching Yarsha and her guards flat-footed.

After defeating Yarsha, Sytarii snuck into a mess hall where the party launched a co-ordinated attack that just destroyed a pair of black earth guards and a handful of cultists.

Expenses at the keep are still running 5gp per day.