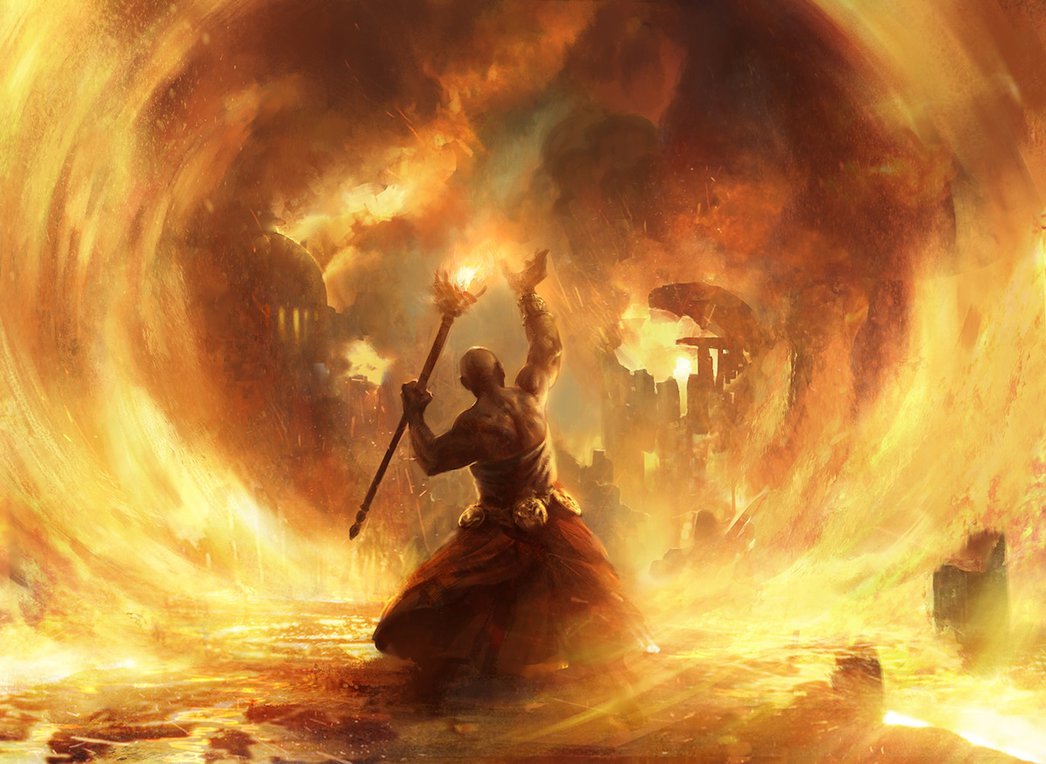 After a relatively restful night’s sleep in the camp near Scarlet Moon Hall, the party roused their new Lord Commander (Ted

), and their druidic friends and headed up the hill to do something about this so-called “Wicker Giant” before it got loose.

Calling out the Eternal Flame Priests who were praying to the Wicker Giant, the party quickly ruined their plans at world domination.  As it would happen, the new Water Cult leader, Ted, cast Sleet Storm

on the priests and the Wicker Giant, wounding, and thus angering, the Fire Elemental trapped within.  Alas, the flame was no match for the deluge of thick wet sleet and the Fire Elemental was doused in less than 12 seconds.  The priests were taken down almost as quickly, with Sytarii charging into the maelstrom to thoroughly disembowel

the priest caught within.

Reinforcements were many as the Eternal Flame Guardians fired crossbow bolts at the party – only to get pulled off their perch by a well-aimed thorn-whip; an Azer came lumbering down the scaffolding only to be beaten to death by the druids and their shillelagh’s; and three Hell Hounds and another Priest came slipping and sliding through the sleet storm, emerging one at a time to be cut down by the adventurers before they could even use their formidable weapons.

After gathering their breath, the adventurers scaled the scaffolding and entered the tower itself.  Choosing not to deal with the magmins

below them, they ascended the stairs.  First one flight, then another, only to be surprised by a very well prepared foursome.  First, a fireball whooshed into the team, knocking poor Telfid out – thankfully, the party was well-stocked with healing potions.  Reyroris shook off the fire damage though and would have fought back, had the fireball not been followed by a stinking cloud of gaseous nastiness that left the party retching.  Two Guardians led their attack with strikes from their flaming swords, further aggravating the situation.  Then the druid, Elizar, 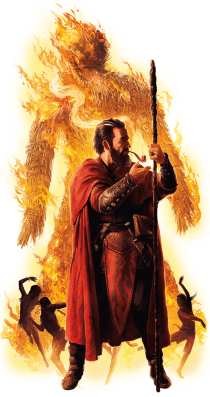 conjured a wall of fire that knocked Telfid out again.  Ganus made himself invisible and ran downstairs to take cover.  Sytarii wasn’t far behind and sprinted for the exit.  Reyroris administered another potion to Telfid and they took off too.  After a few seconds, the druid dropped the wall of fire and the foursome chased after the party.  Unfortunately, Lord Commander Ted had been overcome by the fires and was no more.

On exiting the tower, Reyroris smartly disguised himself as an Eternal Flame Guardian and started chasing Telfid and Sytarii across the courtyard.  Sytarii was running full-tilt and made it through the gateway to the relative safety of the slope beyond.  Telfid and Reyroris were not so lucky as thorny briars and bushes sprouted around them, taking the barely conscious Telfid back into oblivion.  Reyroris’ quick thinking saved the day though, as he yelled, “They went that way,” pointing through the gate and down the hill.  Elizar cleared the brambles and the foursome continued chasing after Sytarii, who was leaving them in his dust.  Reyroris dropped the disguise, healed his

unconscious friend one last time, and the two trotted East into the hills and forests beyond.  An hour or so later, Ganus appeared, huffing and puffing behind the two.

Eventually, and, thankfully, uneventfully, the party made it to their boat and settled in for the night.  Sytarii was resting in the captain’s quarters, with Ganus in a bunk nearby.  Telfid and Reyroris stayed topside, preferring to bunk in the wheelhouse.

Shortly after they were all asleep, three hellhounds padded onto the boat. 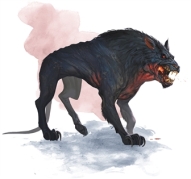 Sytarii hid in the captain’s quarters until he heard Ganus getting attacked.  The hellhounds took turns breathing fire in the wheelhouse and Telfid dropped again, however, he was granted a boon from the heavens and miraculously recovered.  With their combined efforts, the party was able to vanquish the monsters.