The day started well, after a good nights rest at the Bargewright Inn, Keeley was ready to 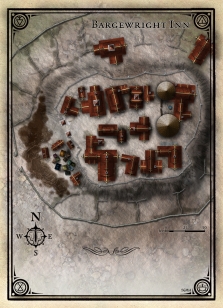 take on the day.  That all changed the moment the Innkeeper, Nalaskur Thaelond, a Zhentarim operative, walked up and asked her and the party to run the inn for a ten-day while he went to Waterdeep to sort out some supply issues.  After he left, she immediately discovered that 6 of the keys were missing.  After much investigation, all evidence pointed at the Senior Sword, Chalaska Muruin, Guardmaster for the Inn.  But it was a frame-up.  Iglor the handyman was the actual culprit and he now sits in prison.  Nalaskur was very happy that the Inn didn’t burn down in his absence, and rewarded the party handsomely for their efforts.

Continuing on to Womford in following up on their lead about the Dwarven Books, the party comes to the boat dock where they are invited aboard by one Shoalar Quanderil, a

water genasi and high ranking member of the Water Cult.  After entertaining the nosy adventurers for an interminable amount of time, he attacked.  Discovering the party was a little more resilient than he’d expected, he unleashed a Tidal Wave that nearly washed the entire party down to Davy Jones’ locker.  With Ganus’ nifty use of the invisibility spell and a few much-needed healing potions, the party was able to destroy the water wizard and his entourage.

The next day, the party took the genasi’s keelboat upriver to Rivergard Keep.  There they

encountered a sour-faced fellow with a drooping mustache named Reash.  After Ganus told him they slew the genasi, he invited them in.  An escort of 3 reavers brought them to the tower room where Reash and a small army were waiting for them.  Reash proved to be a worthy

adversary, but the Reavers, deckhands, and bandits just kept coming.  Wave after wave of water cultists came after the party as the alarm spread throughout the keep.  And wave after wave of cultists died.  Sytarii got to experience what it must be like to be a red dragon, breathing Dragonfire and burning his attackers to a crisp.  With burnt, slashed, pierced and bludgeoned bodies piling up (34 in all), the party was able to stem the tide.  Now, after a short rest, they ready themselves to explore the keep.